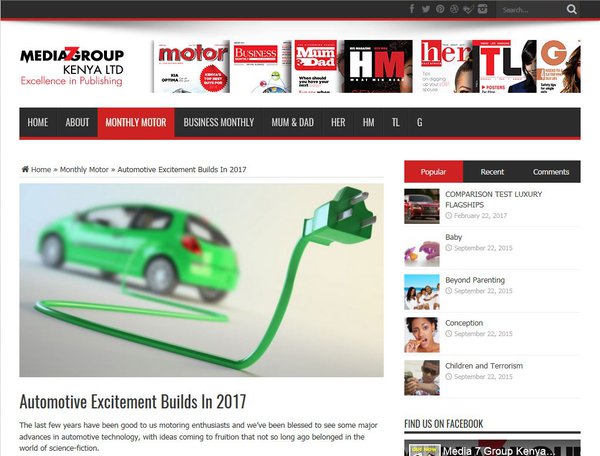 The last few years have been good to us motoring enthusiasts and we’ve been blessed to see some major advances in automotive technology, with ideas coming to fruition that not so long ago belonged in the world of science-fiction. (Monthly Motor - March 2017)

Vehicles that combine electric propulsion linked to internal combustion engines in the form of hybrid cars are now common place and the electric car is finally coming of age after the range-anxiety fears of the early days. With the world of connected cars a reality, motor manufacturers are competing to find the next big thing. The result is a plethora of fabulous cars. Here is just a taste of what is to come in 2017.

Already recognised as the most dynamically capable, performance-focused Jaguar, the F-Type sports car continues to evolve, with a fresh look, state-of-the-art infotainment system and, intriguingly, a world-first with the ReRun app that combines vehicle data with GoPro video to enhance the driving experience. True enthusiasts will be able to capture and share real-time high quality video of their driving experiences using the app, developed in collaboration with GoPro.

While retaining luxury craftsmanship and attention to detail Lexus’s intentions were signalled right at the start of this year at the North American International Auto Show in Detroit with the world début of the fifth generation flagship LS saloon.

This model will use a version of the new Lexus global architecture for luxury vehicles that also underpins the glorious LC Coupé which itself will reach the UK’s roads before the end of the year with both hybrid and V8 powertrains.

The LC 500h also marks the first deployment of Lexus’s Multi Stage Hybrid System that promises to transform the driving experience with more direct response to driver commands and a higher level of dynamic performance.

The new Aston Martin DB11 is the first in a line of seven new models to be launched over the next seven years. Although announced in 2016, the first examples will start appearing this year on our roads. Also out for the New Year, the British company has turned up the heat on its ultimate Super GT to create the new Vanquish S. With sharper styling and greater potency, careful attention has been paid to the engine, chassis and aerodynamics to create a thrilling machine.

You can never keep a good car manufacturer down and Audi have delivered the goods once again. The German car maker has announced what may be one of the most spectacular launches this year: The Q8. Although not officially available until 2018 the highly efficient and extremely comfortable Audi Q8 concept has been shown at the Detroit Motor Show the concept shown combines the spaciousness typical of a SUV embellished by the elegant lines of a coupé.

The new model will tap into a new segment for Audi by offering an elegant alternative to the classic design of the full-size class. Propulsion is provided by a powerful, yet highly efficient plug-in hybrid with 330 kW of system output and 700 Nm (516.3 lb-ft) of torque. This car will be something special.

But it can’t always be about luxury vehicles, unfortunately. Most manufacturers are offering something new and improved, encompassing technology that has trickled down from luxury brands to the vehicles that most of us buy.

Peugeot have changed how we view the Sport Utility Vehicle with the brilliantly designed seven-seat 5008 that sets a new benchmark for the class. Meanwhile, staying in France, Citroen have their revised and funky DS3 hatchback. The exciting rear-wheel drive Kia Stinger GT with 365hp is a welcome surprise and is the first true performance car from the Korean company. It will be on sale in the UK around September.

New cars are also coming from Abarth, Mini, Nissan and Honda and the semi-autonomous market has Tesla, Hyundai, Mercedes-Benz and, in the USA, Cadillac, all road-testing self-driving vehicles.

For now though, most of us will prefer vehicles we can drive ourselves, especially if they come in the monster guise of the new 2017 Bentley Continental Supersport.

This new 12-cylinder behemoth is essentially a rolling example of excess. Big is beautiful. It is the most powerful Bentley ever, with its 700hp W-12 engine, it is also the quickest and the fastest Bentley ever, with its maker claiming that the sprint to 62mph takes just 3.4 seconds and on to a top speed of 209 mph.

While straight-line speed is surely this Continental’s reason for being on the planet, it also benefits from some important handling improvements. The suspension set-up is slightly lower and stiffer than that of others in the Continental stable. The interior benefits from lashings of suede and carbon-fibre trim Supersports badges stitched into the headrests. This is the one you will not miss when it passes by.

No tour of the world’s car makers can be complete without at least a passing nod to the spiritual home of the desirable automobile – Italy. Despite the rather shaky reliability record of the past, Alfa Romeo are determined to regain their former glories with the already released Guilia and the new Stelvio SUV, available to buy in 2017.

Set to become the benchmark for the segment, the new model encapsulates that true Alfa Romeo spirit, that make it one of the world's most desirable brands. With distinctly Italian styling; the latest engine technology topped off with an outstanding power-to-weight ratio. The Stelvio is a gorgeous car that makes the opposition look dowdy.

Wherever you are in the world and whatever type of vehicle you favour, one thing is for sure. 2017 is going to be the year when everything that is new in automotive technology is going to be possible.

The snowball is rolling. Words like connectivity, electrification and autonomy will trip of our tongues with the same ease that internal combustion and carburettor used to. We are no longer connected to the road, we are connected to the world and we haven’t even seen what Elon Musk at Tesla is going to come up with next!

Finally, this summer, a new vehicle takes flight, bringing the stuff of science fiction even closer to real world fact. Lexus has worked with experts in super-conductive technology and magnetic levitation to create one of the most advanced Hoverboards the world has seen. Four wheels? That’s so 2016.